Jennifer Angus is a professor in the Design Studies department at the University of Wisconsin – Madison. She has exhibited her work widely in the United States and internationally in Australia, Canada, Germany, Japan and Spain. Her installation, In The Midnight Garden,  was part of the 2015 “Wonder” exhibition at Smithsonian American Art Museum’s Renwick Gallery. She has received numerous awards, including Canada Council, Ontario Arts Council, and Wisconsin Arts Board grants.

For nearly 15 years, I have been creating installations composed of insects pinned directly to a wall in repeating patterns, which reference both textiles and wallpaper. When viewers enter one of my installations, they are greeted with something they think they know – that is, a patterned wallpaper that could be in anyone’s home. However, upon closer examination, one discovers that it is entirely made up of insects. A tension is created by the beauty one observes in the
pattern a 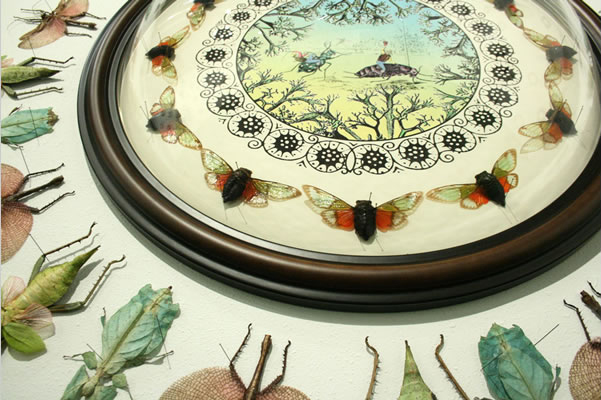 nd the apprehension we feel toward insects. I know very few people who welcome insects into their home. In fact, we have a certain hysteria about them. Culturally, insects are a sign of dirtiness and disease. My work explores ideas of home and comfort. It alludes to the unseen world of dust mites, germs and bacteria, both friendly and not.

For this exhibition I have work displayed on both the walls and the floor, the latter entitled Carpet Beetles. I have fond memories of lying on the Chinese carpet in front of the fire in my parents’ living room. The carpet was thick, soft and luxurious, but what was actually lurking there? It has occurred to me that if one actually walked across the carpet in this show there would be an unpleasant crunch – a crunch the braver amongst us are familiar with when grinding our heel upon an unwanted pest. Those who are not so brave may well recall the feeling of jumping up on a chair as something scurries by. I am interested in taking a familiar form, in this case a carpet, and toying with the viewer’s comfort zones.

For this piece I researched patterns found upon carpets throughout the traditional rug-weaving areas of the world: Turkey, the Caucasus, Iran, Central Asia, western China and India. Obviously, I am playing with the existing connection between beetles and carpets, for the carpet beetle is a pest commonly found in homes. The larvae are a particular menace, for they often feed on wool rugs.

It is undeniable that in the presence of so many insects, issues related to the environment are bound to surface. For me, many historical issues of collecting are raised, in particular the insatiable Victorian collector for whom nothing was sacrosanct. In fact, not only were insects collected at that time, but so were carpets. Today there are carpets in museum collections in which the maker’s tribal group no longer exists, for they were assimilated or annihilated during campaigns of war. This seems worth consideration, given the current state of tension in the Middle East and the United States. 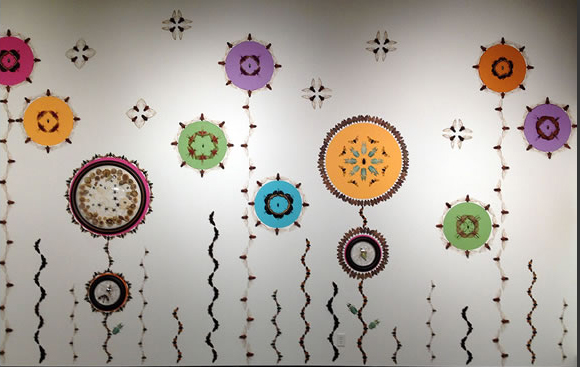 livelihood. Since most of these species come from a rainforest environment, the people collecting them will not cut down the jungle that provides their livelihood. It is ecologically sound. They are a renewable resource.

There is often confusion as to whether the insects in my work are real. Yes, they are although they are dead and dried. The colors are their natural color. I have not painted them. Many people who visit my exhibitions were never aware that such unusual insects exist. I hope that my exhibition will get them excited, and perhaps they will be motivated to get involved with one of the many of the rainforest preservation projects out there.

I would also like people to think about their own environment and behavior. How is urban and suburban encroachment affecting wildlife big and small in your neighborhood? It is easy to take up the case of larger mammals, birds, and fish but what about smaller creatures who have an important role in the ecosystem to play, be it pollinating flowers or helping in the decomposition of various matter?