The Carolinian Herbal An Interview with UNC Charlotte's Heather Freeman

Heather D. Freeman is associate professor of digital media at UNC Charlotte. Her works in animation, digital print and mobile applications are exhibited nationally and internationally. Seven works in her ongoing series, The Carolinian Herbal, are exhibited in the KEEPING WATCH on HABITAT exhibition. See her work at epicant.com.

Your work blends science, mythology and art so naturally. Tell us about those interests.

Two scientists raised me. My father studied physics and chemistry but was basically a software engineer for RCA. My mom wanted to be the next Jane Goodall, but raising two kids got in the way. When my brother and I were older, she went to school for her M.P.H. in children’s public health. She spent most of her career as an epidemiologist, researching children’s exposure to pesticides; I used to help her collect dust samples in Jersey City and Newark. They were both really supportive of my interest in art.

As a kid, I was really interested in fairy tales and mythology and although I loved science, these interests seemed such separate worlds. It wasn’t until graduate school that I started to appreciate the lore and mythologies within the history of science. This culminated in reading a lot about alchemy, since alchemy was sort of this weird hybrid between ceremonial magic – mystical ideas about how the universe is structured and organized – and early approaches to chemistry. In a lot of ways, alchemy grew up to become modern chemistry. (And chemistry is still pretty magical!) Many of the ideas found in alchemy are still part of our common language today. For instance, we can talk about a person, or color, or food having a “fiery” quality, but we’re really talking about that thing with poetic description.

So I’m really interested in how we still use terms and images that hearken back to this time when an empirical understanding of the world was still developing in Western Europe. Modern science, as we understand it today, was kind of walking a line between this mystical, folkloric thing and the scientific method. I’m simplifying a lot, but it’s fascinating to wonder about these alchemists. 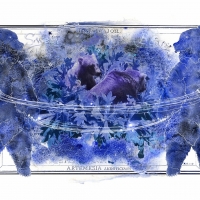 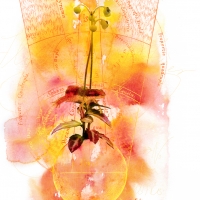 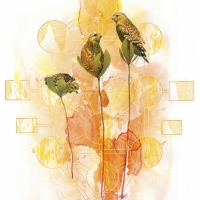 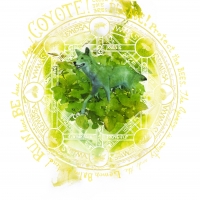 How did you develop the idea for your series, The Carolinian Herbal?

I love reading about plant and animal folklore and since I grew up in New Jersey, this has mostly revolved around that biome. A couple of years ago it dawned on me just how different the biome here in Charlotte is. We have totally different plants and animals and I realized I hardly knew any of the native species. So I started researching local flora and fauna and this led to learning about their folklore, too. While much of the folklore I found was from the Catawba and Cherokee peoples, other tales had origins from around world. Br’er Rabbit is a good example, whose stories were carried by enslaved peoples from West and Central Africa but were interwoven over time with stories from the Cherokee. What amazes me is how folklore about plants and animals is continually changing and evolving. It’s really beautiful, really amazing to realize that our folklore is truly a living thing, a rich creation of the peoples who share (and change) these stories.

One of the other things I found is that folklore doesn’t just consider native species; it evolves to consider invasive and naturalized species as well. There are some good urban legends about invasive species, for sure. But this makes considering the folklore a bit challenging, too. A good example of this is the coyote. The coyote’s only been in North Carolina since the 1980s – it’s really recent and it’s regarded as a pest species to boot. One reason coyotes have been so successful here is that they’re now the apex predator (if you’re not including humans). They’re filling the role that wolves used to play. One challenge with coyotes is that they drive out and kill native foxes, which are also key players in the ecosystem.

The coyote has this really rich mythology among different Native American nations in the Southwest. He’s a trickster, for sure, but he can also be an advocate for humanity. We don’t have myths about coyotes in North Carolina, none that I’ve found anyway. But as I said before, people create new myths and animal lore all the time, so I decided to go ahead and forge my own mythology around coyote, the coyote who’s come to call North Carolina home. To me, coyote is still a trickster, but he’s also a little like Anubis, an ancient Egyptian god of the dead. Coyote is also someone who balances scales, who looks at justice.

So these works consider the ecological roles of North Carolinian plants and animals, but I also try to reconnect them to their folklore and this sort of evolving local myth cycle. For instance, in the coyote piece, there are all these little bees around it. The decline of the pollinators is a real concern for North Carolina – really, it’s a global crisis. But I figured, if coyote is this re-balancer of scales and justice, why not invoke him to bring back the bees, too? (Trust me, my husband and I don’t use pesticides and our garden is pollinator-friendly, but every little but helps.)

How do you choose which plants and animals to pair together?

When I first started to think about this, I was very linear about the pairings: This or that animal relies on this or that plant for food. The problem with that approach is it implies linear relationships and ecosystems are highly complex webs. So when I pair animal and plant species, it’s more about the network that connects them.

An example is my work with the brown-headed nuthatch, a great little bird that used to be really common in the Southeast. Their prime habitat is old pine forests. We’ve lost a lot of them to deforestation and urbanization, hence fewer brown-headed nuthatches (not to mention a lot of other species as well). This got me looking at the longleaf pine – really beautiful, but slow growing trees. One of the really cool things about mature longleaf pine groves is the ecosystem that forms around their undergrowth. There is this huge diversity of plants and animals that rely on these longleaf pine forests, including all kinds of legumes. Legumes are super cool to me because they’re this powerhouse food source and amazing for the soil. So I actually ended up pairing the nuthatch with vetch, which is a weed we find all around Charlotte. It has really cute little purple flowers. Vetch is sort of like the nuthatch – unless you’re looking for it, you’d probably miss it. Yet both play complex roles in their ecosystems.

What is the process of creating these works?

I start by photographing local plants in the woods behind my house, at Reedy Creek Park and elsewhere in Charlotte. I admit: A lot of the time I don’t know what a plant is when I photograph it. So then I spend a lot of time researching botany books and websites to identify the plant and then start researching the folklore as well.

At the same time, I’m also photographing taxidermy and researching animal folklore. For some animals this process takes a really long time, because there’s just so much lore. Interlibrary loans have really saved me here.

Once I decide on a plant and animal pairing, I combine the photographs in Adobe Photoshop. I’ll print these out, watercolor them and then scan them in again to continue to revise them digitally. This process of going back and forth from a physical print to the computer has been a part of my creative process for over a decade.